It seems like it’s a trend for everyone and their mother to post a year-in-review post and to talk about their goals for the next year. So at the risk of seeming cliché, here are some thoughts from the previous year and some things I’m looking forward to.

This has probably been the year of biggest change for me since I left for college or when I graduated – maybe more. I made the difficult decision to leave the teaching profession, joined our small company (which Max / Justin incorporated in March) where I work on a bunch of different projects, and did some world traveling. We also finished remodeling our house after 3 and a half years of projects (nevermind that a “small project” turned into an entire-house remodel).

As I’ve reflected on the last year, it struck me that a lot more happened than I thought would. In January 2013, I would have never guessed that I’d go from teaching Chemistry to writing about eCommerce and WordPress, managing content (sales copy, documentation, etc) for our own small tech company, or planning some more international trips.

Then I made the decision to stop coaching softball in March, to stop teaching altogether in April, and to start more projects than most humans would want to in August. And the great thing about all of this is that it’s just gotten better and better. I made the super-scary jump into the unknown world of self-employment and faced the dangers of learning a lot of new things, and yet I’ve found that The Beatles had it right: 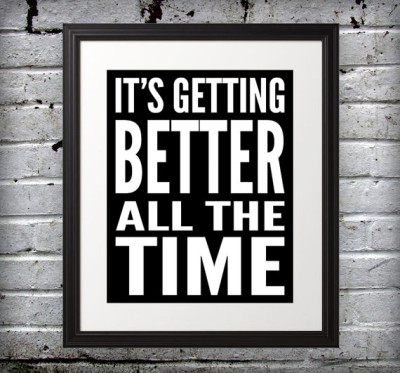 You can buy this here.

The fear of the unknown is totally worth the ability to learn new things every day, work from anywhere we want to, and write from 10pm to 2am if I feel productive that night. I love learning new things again at work rather than feeling like I do a lot of the same things over. Even though I’m not learning about Chemistry, I do enjoy reading scientific articles still, but really like learning more technology-specific stuff. It’s also been interesting learning a lot more about WordPress and decided that writing my own plugin will be on my list to do for this year.

While 2013 has been a year of pretty drastic change, I’ve also had a lot to be thankful and a lot that I’ve enjoyed. Some favorite moments from the past year include:

We’ve got even more craziness planned for the next year, so now that I’m looking back on 2013, I can only imagine what I’ll be saying at the end of 2014.

The biggest change will be the decision to leave our home and work on and off in Boston during the spring / summer. We’ve decided to test working in the same office as a company versus having everyone work remotely to see how it influences the way our business works. While our home base will still be in PA, we’re excited to make a big change and shake things up, even though it’s been really comfortable having a house that’s not in various states of completion since we finished remodeling.

Truthfully, I think the comfort may be part of the reason we want to make a change. I really like having a home, but if I’m not constantly starting something new I know I get restless. I also think there’s a lot of value in doing everything you can to make yourself uncomfortable, so you confront those small fears that really have no reason to take root. I think 2014 is going to be year that challenges us to see how far we can take our work, in addition to seeing how far we can climb up the ‘discomfort ladder’ to work on some personal growth as well.

Aside from transitioning successfully into an office environment in the spring and writing my own WordPress plugin start to finish, I have a few other goals I’d like to accomplish. First, I want to take SellwithWP.com to the point where it generates enough revenue to sustain itself, including site maintenance costs, as well as compensation for guest posters. Guest posting usually provides value for the people posting due to the exposure they get as well, but I’d like something tangible associated with that exchange as well, however small.

I’d also like to read one book every two weeks, and try to read more consistently. I’m mostly a binge reader, and will read like seven books in a few days, then not read a whole book for a month or two. Instead of always getting wrapped up and binge-reading, I want to learn how to read methodically, and in bite-sized chunks so that reading becomes more of a habit than it is currently.

Aside from those goals, I’m excited to see where the year takes me. After witnessing the sharp turns and quick changes I went through in 2013, I’m not going to be naïve enough to make any real predictions for how the year will go. And strangely, I think it’s better that way anyway. I love surprises.