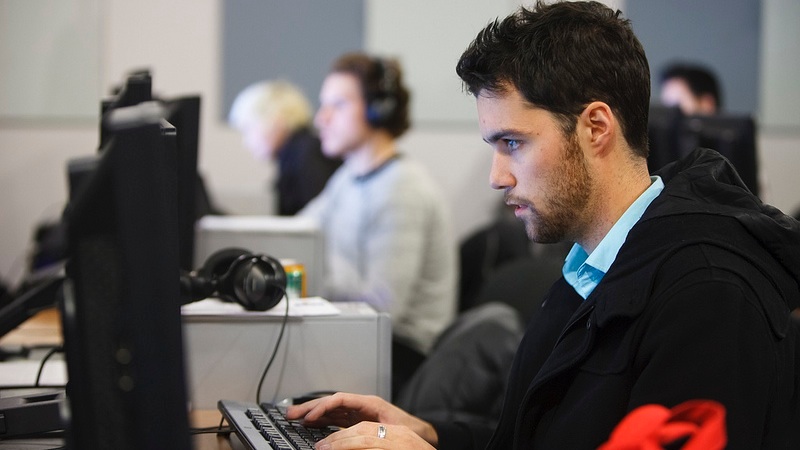 We’ve just wrapped up 6 months of working in a shared office space, and I’ve learned some really interesting things from doing so. There are some very cool aspects to having an office in a shared space, and there are some super annoying things. I didn’t necessarily realize each of these things before we moved into the space, so there are some things I’d recommend that you consider if you’re thinking about renting a space.

We rented a small office in a brand new space. Offices were private, but are made of glass rather than tiny cubicles. There were about one hundred offices on our floor, which ranged from single-person to twenty-person offices.

First off, you should really think about how you work best before choosing a work environment. I have trouble focusing if there’s stuff going on around me. When I really dig into work, I remove all distractions and go into beast mode – when I get rolling, I basically have blinders on. However, for me to get into that hyper-focused space, I can’t be distracted by a million things going on around me. I also find it tough to refocus if that concentration gets broken by something really distracting.

Unfortunately, this happens pretty frequently in an office like the one we were in. Glass walls are great for making you feel like you’re not penned in, but they’re awful for keeping distractions out. Sometimes I feel like it’s tough to be as productive as normal when you can see people walking by all day, what your next door neighbor is writing on their walls with dry erase marker, people using the printer, or hear people taking phone calls in the hallway right next to you instead of a phone room.

Another thing that’s annoying is that you don’t know everyone around you. When you have an office just for your company, there’s a sense of responsibility; nobody takes other people’s stuff from the fridge (though this seems to happen more the bigger the company), and it’s tougher to be rude or disregard the people around you since you’re on the same team.

That doesn’t happen when you have a vacant office next door and, despite the other three vacant offices in a row and phone rooms, people decide to take loud, obnoxious phone calls right next to your desk while you’re focused on solving a problem. There’s a far more distinct lack of consideration for the “other companies” around you, which I don’t think necessarily happens as much when you’re supposed to be working with the people around you.

Along the same thread, you also have no control over the office culture. There were some fairly obnoxious people where we worked (there were also lots of very nice people!). However, you can’t fire the people that don’t fit into your culture – they’re not on your team. They’re just strangers you may or may not have talked to while you get your coffee or have a work happy hour. You’re stuck with them since you’re all just paying to coexist in the same space. Even the people that feel the need to steal other people’s Gatorade from the fridge (true story).

Part of what I enjoy about our company is being able to build a culture that you really enjoy and look forward to being a part of. Since you don’t really have a say in that in a shared space, this can be a downer.

Despite the downsides, there are some great benefits to working in a shared space. There are some very nice people in the offices around us, and you simply hope there are more of these people than the inconsiderate ones. We worked around some awesome people as well as some knuckleheads.

We also met some interesting people and made both personal and professional connections. It is nice to sometimes have different people to meet / chat with at new member breakfasts rather than the same people from your company day in and day out. The networking opportunities in a shared space are pretty much unparalleled.

I also really loved having coffee made already when I got there in the morning smile . Our office had coffee, water, and beer available all day. They also ran little social events or happy hours pretty frequently, which were fun and they broke up the week. For example, they held events for Red Sox games, gave out cool drinks for sending each other messages in the office app, or other fun little “culture” things.

Having access to meetings spaces and conference rooms in a shared space is also great, and made it easy to have status meetings, Skype calls, or chats with our advisor. It’s also way nicer to do these things in person rather than with Google Hangouts as we did when we were all remote.

I liked having an office in a building versus an office as home as well. This is probably the biggest thing for me, as it really helps to separate work from home. When I’m at work, I’m simply working – not feeling like I could be reading, playing the guitar, or watching a movie. I don’t feel like I should be doing something else fun or taking some time to myself. When I’m home, I can focus on enjoying these things rather than feeling bad that I’m not working.

While I did like being in the space we were in, I’m planning to try something different now that our time in Boston has concluded. I think a more private office would suit the way I work better. I wouldn’t be opposed to being in a building again, but definitely get distracted in a negative way sometimes by the people around me, and would probably benefit from a bit more separation.

I don’t think I fully leveraged the networking opportunities at our office, but that’s also not the way I work. I like to go to work, blitzkreig whatever project I’m working on, and go home. Then I bang out the next project. I don’t like feeling like I’m wasting hours in my day by hanging around in the kitchen or playing shuffleboard. This might not necessarily be a good thing, and it’s something I should work on. However, I’m still at the point where I have too much to do and not enough hours smile .

I also expected the atmosphere to be more about “hustle” than it is. Many of us were part of small companies clawing to take off, and I was excited to have that amped-up atmosphere. Instead, I saw everyone leaving at 4pm and thought, “How in the world did they get everything done? I’ll be here for 3 more hours.” It was a far more laid-back atmosphere than I anticipated.

My advice to you if you’re looking for spaces would be to first think of how you work – can you have stuff going on around you if you’re elbow deep in a problem? Do you just need some headphones, or do you need a bit of a bubble around you? I’d also consider what kind of culture I’m looking for: do you want to meet new people and build connections, or do you want to get maximum personal productivity in a minimum of time? These were questions we didn’t really ask before, but are important to ensure that you’re happy with the working environment you’re in.